These are the most colourful streets in Europe

15/12/17
These are the most colourful streets in Europe

From the prettiest towns and remote villages to unusual buildings and fisherman’s houses, Europe is a treasure trove of colourful locations just waiting to be discovered. Here are just some of our favourite streets that are bursting with colour. 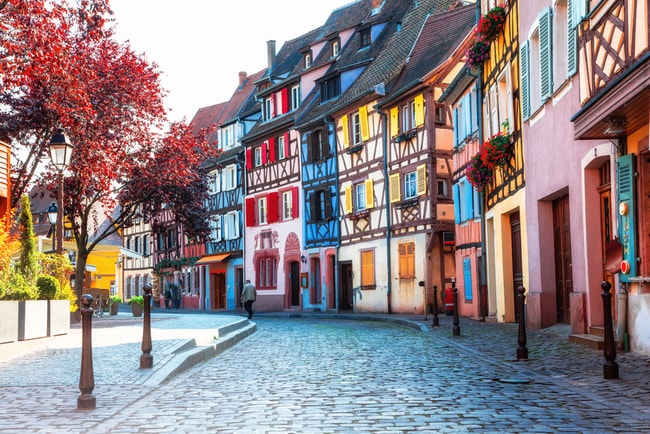 Considered one of the most beautiful towns in Europe, every street in the beyond-ridiculously picturesque, medieval Alsace town is an explosion of colour. Nicknamed ‘Little Venice’, the mixture of well-preserved Germanic and French architecture gives the town its unique style stamp that continues to captivate visitors. 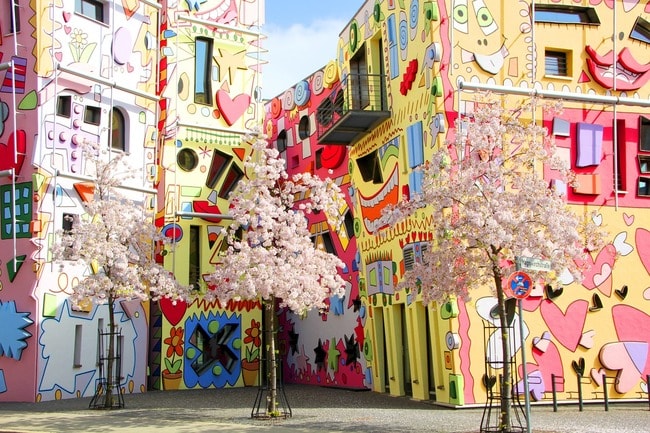 Painted by American artist James Rizzi in his distinctive graphic illustrative style, the Happy Rizzi Haus may have divided opinion between the young and old residents of Braunschweig, but it’s certainly brought colour to Ackerhof. Designed by Konrad Kloster, the office complex incorporates misshapen windows and reliefs that mimic Rizzi’s drawing style.

The red-hued Spanish housing estate might resemble a crazy M. C. Escher drawing, but it was actually inspired by the traditions of the casbah and plays with the use of public and private space. The creation of architect Ricardo Bofill built in 1973, ‘The Red Wall’ has echoes of Mexican architect Luis Barragán, who inspired architecture interns to visualise Trump’s border wall as a pink structure. 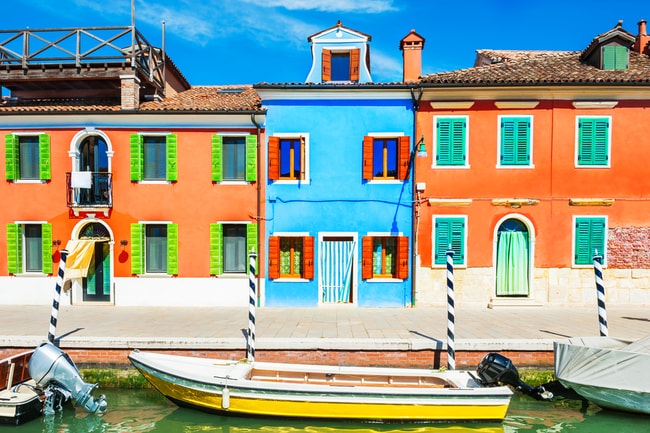 You can’t move for brightly-coloured fisherman’s houses on the lace island of Burano, situated in the Venetian lagoon. Keeping to a strict colour scheme, which has been in place since the founding of the island, residents cannot paint their houses in one of the rainbow colours without first getting permission from the government. 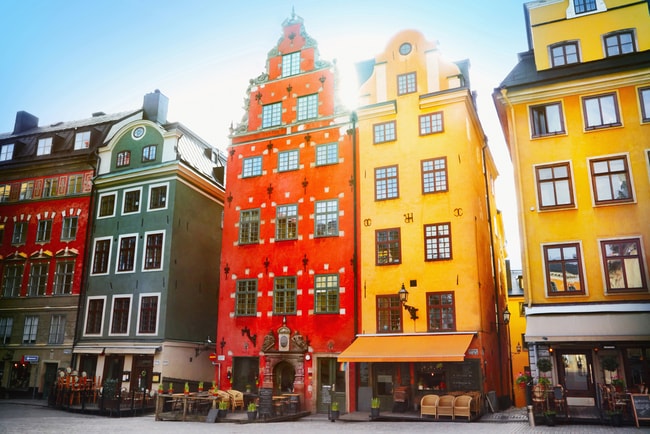 Stortorget, Stockholm’s oldest square, is known for two things: its famous Christmas market, and the strikingly-painted 17th-century merchants houses. The bold red, yellow and green buildings in the heart of Gamla Stan (the Old Town) cheer the coldest of Scandinavian days and are the perfect backdrop for your holiday snaps. 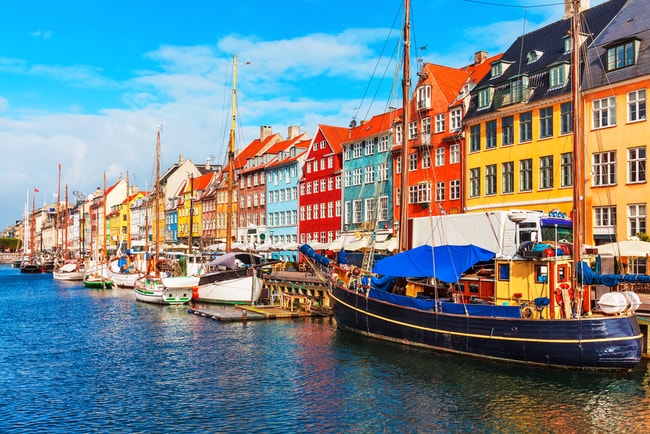 We can’t get enough of the brightly coloured 17th-century buildings that line the north side of Copenhagen’s old harbour of Nyhvn, where the writer Hans Christian Andersen once lived. 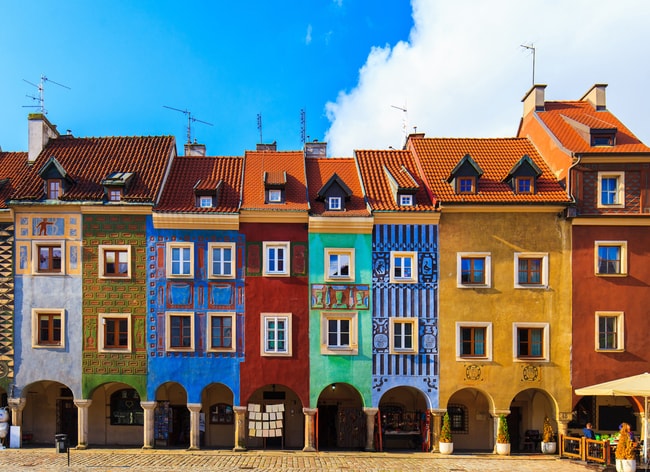 The Old Market Square of Poznań in Poland is surrounded by former merchants’ houses that have been painted in Mediterranean hues of azul blue, verdant green, and earthy yellows. Much of the square was destroyed during World War II and was carefully rebuilt in the 1950s, so each building is individual with different ornate details and friezes. 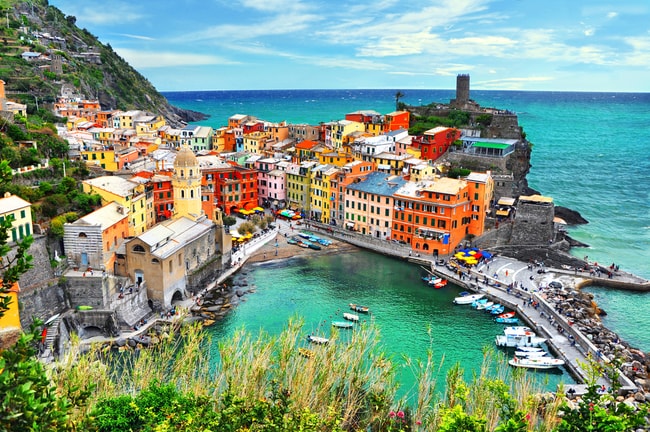 Part of the Cinque Terre Italian Riviera, all the buildings in the small seaside town of Vernazza are a vibrant array of summery oranges and yellows. Legend would have you believe that, like Burano, fishermen painted the houses these colourful tones to distinguish them from sea, but it’s more likely due to the influx of tourism in the 1970s, when the once hard-to-reach villages became more connected via the train network. 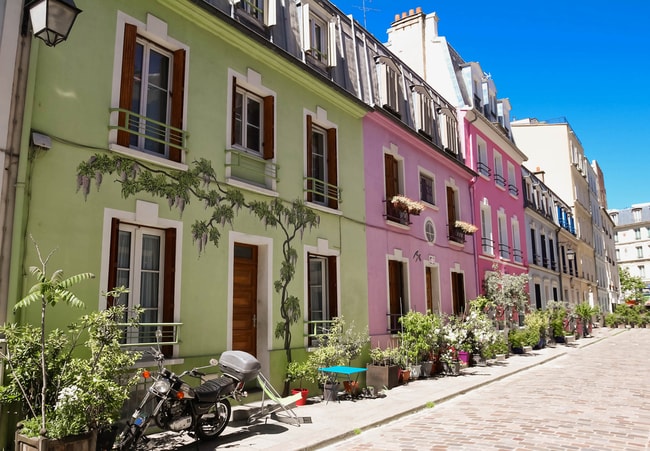 Just a short walk from the hustle and bustle of Gare de Lyon in the 12th Arrondissement of Paris, there is an enclave of pastel heaven. Lined with terracotta plant pots and window boxes of flowers, the residential street named after a Minister of Justice Adolphe Crémieux boasts a collection of prettily-painted houses.

Nova do Carvalho in Lisbon, Portugal 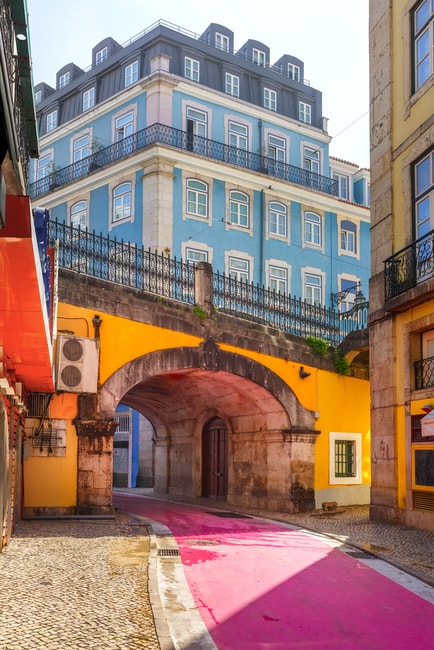 Known for its uniquely tiled buildings, Lisbon is a warren of brightly-coloured streets, many of which can be found in the old town. But it’s Pink Street you want to head to, a project by José Adrião Architects and the city council to create a positive regeneration of the street.

europe colourful-streets
Today news
1
There’s Now a Space Mountain Named for Octavia Butler
2
The most luxurious experiences in Monaco
3
Abandoned, ruined and uninhabited: This is the village of Craco, an Italian hillside ghost town
4
All you need is love... and a Beatles Tour in England
5
Angkor Wat: History of Ancient Temple
En esta sección
Comments
Iceland's most spectacular Game of Thrones filming locations
Fingal's Cave, the astonishingly geometric cave that has inspired everyone from Jules Verne to Pink Floyd