The ‘Hell on Earth’: Spike Island in Cork that is Irish Alcatraz

On this cold, clear day, with a low afternoon sun casting soft shadows, it was easy to overlook the enormity of this construction in Cork harbour – and the dark reality of Spike Island fort and prison itself. Until we learned that the vast banks surrounding the 24-acre fort were actually built in the 1850s by the inmates themselves.

Irish convicts awaiting transportation, mostly to Australia, were tied together by ball and chain and put to work on the land with shovels and pickaxes. The earth and stones they collected in wooden carts were so heavy that it took 18 men to pull them. It sounded more like a tale of American slavery than colonial Ireland.

Life was infinitely worse inside, however, for those guilty of misconduct or branded dangerous offenders – often political prisoners, murderers, rapists and violent thieves. These inmates were held in solitary confinement within a purpose-built punishment block. They were heavily chained, often to the wall of their cells; slept on cold, damp stone floors; and clothed in black from head to toe – including a hood with only narrow slits for eyeholes. 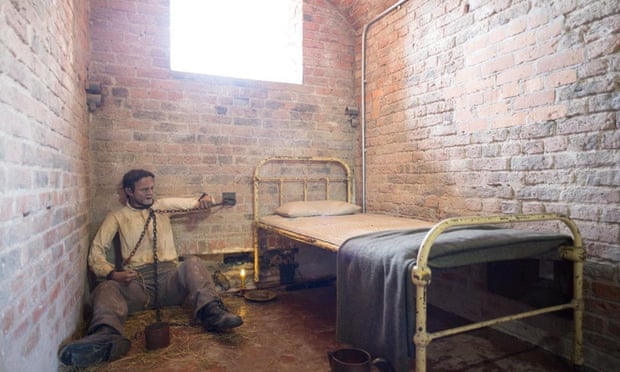 It is the vivid combination of a penal history to rival Alcatraz (the prison at Spike Island is actually said to be 10 times larger in size) and a long political history to match Robben Island (there is evidence that Cromwell’s troops held Royalist prisoners on Spike as early as the 1650s) – and its reopening as a visitor attraction in the summer of 2016 – that has sparked renewed interest in the place and its violent history.

Last year, at the World Travel Awards, for example, Spike Island was named “Europe’s Leading Tourist Attraction” (somewhat remarkably ahead of such competitors as the Acropolis, La Sagrada Familia and Buckingham Palace).

In fact, it’s not hard to see why. For one thing, there is a lot to see on the island, from six-inch guns secreted away at the end of deep bastion tunnels, to the imposing central parade ground, an artillery “gun park”, striking rampart outlooks south to the mouth of the harbour, and modern cells that echo and clank like something out of 70s sitcom Porridge. Then there’s the fascinating, if dark, history.

“In the mid-19th century, Spike was not only the largest prison in the world, with 2,300 inmates, but also a place of severe punishment – of hard labour, strict discipline and religious instruction,” said John Flynn, Spike Island’s lead tour guide. “That’s why it quickly became known as ‘Ireland’s Hell’ and ‘Hell on Earth’.”

Prisoners not held in solitary confinement were crammed 12 to a cell; overcrowding, malnutrition and poor sanitation meant fatal diseases and mental illness were rife. “The prisoners are like a menagerie of wild animals that snarl and fight in defiance of their keepers,” wrote prison chaplain Charles Bernard Gibson in 1863. There is evidence that at least 1,200 men died on the island.

A children’s prison held up to 100 young offenders aged 12 to 16. Many boys, and adult men, were sent to Spike as a direct consequence of the Great Famine of 1845-49, often for such petty crimes as vagrancy and stealing bread or chickens.

Nationalists, Fenians, rebels and revolutionaries were also part of the prison population; in 1921, during the War of Independence, more than 600 republicans were held on the island – a few even escaped.

This vivid history is told through exhibitions, videos and museum displays; walking trails also lead around the fort and island, offering spectacular views, both of one of the largest natural harbours in the world and back a mile across the water to the heritage town of Cobh, from where boats to the island depart and return.

We were told stories of the many characters associated with the island: James Grey, the ingenious “Jack-in-the-Box”, who would conceal himself in a hinged container and steal from other boxes aboard ships and trains; serial prison escapee William Johnston; and daredevil British author, spy, explorer and Spike Island colonel Percy Fawcett. 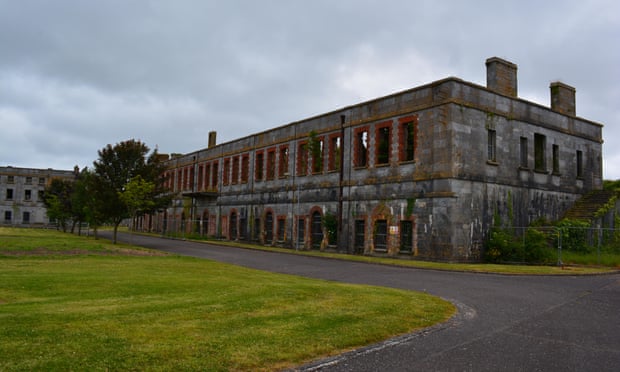 Most of all, though, Spike Island stands as a fascinating microcosm of Irish history over the past 1,500 years. We learnt about the 6th-century monastic settlement, Cromwellian campaigns, 18th-century smugglers, British military fortification, the infamous convict depot, and Irish republicans incarcerated following the Easter Rising and during the War of Independence.

More recent times have seen a British sovereign military presence up to 1938 as part of the Treaty Ports settlement (Churchill described Spike Island as “the sentinel tower of the approaches to Western Europe”); subsequent use by the Irish Army and Navy; conversion to a notorious civilian prison in 1985, mostly for young men convicted of minor offences such as joyriding, which led to a riot that destroyed many buildings; and, finally, modern tourist facility.

It is history, much of it difficult and disturbing, as palpable physical presence. There is graffiti on the mattresses, written by inmates, in the modern prison; the stark cells in the Victorian punishment block still seep damp. The regular evening Spike Island After Dark tours only heighten this intense feeling of unease.

Add new initiatives this summer that include plans for a larger second ferry, evening harbour tours, group overnight stays and further walking trails, and it becomes clear that Spike is a travel destination with considerable potential.

“We try to give visitors the richest experience we can but, to be honest, we’re still developing and still learning about the island,” says John Flynn. “Spike is a sleeping giant.” Ireland’s Alcatraz seems wide awake now.

europe island Ireland Cork
Today news
1
There’s Now a Space Mountain Named for Octavia Butler
2
The most luxurious experiences in Monaco
3
Abandoned, ruined and uninhabited: This is the village of Craco, an Italian hillside ghost town
4
All you need is love... and a Beatles Tour in England
5
Angkor Wat: History of Ancient Temple
En esta sección
Comments
Devil's Bridge, the bridge that was specifically built to create a circle reflected in the waters
SuperShe Island: Women-only luxury retreat opening in Finland