All you need is love... and a Beatles Tour in England

When I suggested to my Beatles-obsessed husband that we should go to Liverpool, I won points for the rest of our marriage. What I didn’t realize until later, when I was standing on a certain lane behind the shelter in the middle of the roundabout, was that I would actually enjoy myself. Very strange.

I had wondered if, in making such a pilgrimage, there would be a place for the nonreligious. But when slanted sunbeams fell on Eleanor Rigby’s headstone as if on cue, I shivered a little and smiled.

My husband, Ricky, knows all the answers (at least when it comes to the Beatles), so I let him engage in trivia contests with our tour guide in Liverpool. Freed from the tug of minutiae, I was able to marvel in the phenomenon of the Fab Four: how one band united the world, and continues to do so, 50 years after the release of “Sgt. Pepper’s Lonely Hearts Club Band.”

Everyone loves a good origin story. Even better — at least for me — was the epilogue.

Where does one begin the story of the Beatles in Britain? At the crosswalk, of course. Last summer, we headed to Abbey Road in London just hours after we stepped off the plane at Heathrow Airport to recreate the scene on the eponymous album (minus the Volkswagen). A few hundred people were doing the same.

Since Abbey Road Studios is still a working recording studio, it was closed to the public. We had to settle on visiting the modest gift shop in the building next door. There, we posed in front of the wall painted with the “Sgt. Pepper” album cover and Brazilian tourists took our picture. My husband bought some guitar picks for his guitar teacher. That was the extent of our entire Beatles souvenir purchases, purists that we are.

Outside, we met Shari and Richard Stegman, from San Diego, who were in England celebrating their 30th wedding anniversary. Like us, they were on their way to Liverpool. Not like us, since we were looking to save money, they would be staying at the Hard Day’s Night Hotel in Liverpool.

They snapped several pictures of us crossing Abbey Road and we did the same for them. I learned that their wedding song was “Here, There and Everywhere.” They equated the Beatles, Mr. Stegman said, with “a lifetime of love.”

Ricky, who first started playing the Beatles on his guitar at age 13, approved of their choice. “That’s a very beautiful song,” he told me. “The lyrics are very romantic and if you pay attention to the chord structure, it’s cyclical. The ending is also the beginning, it’s very clever.” 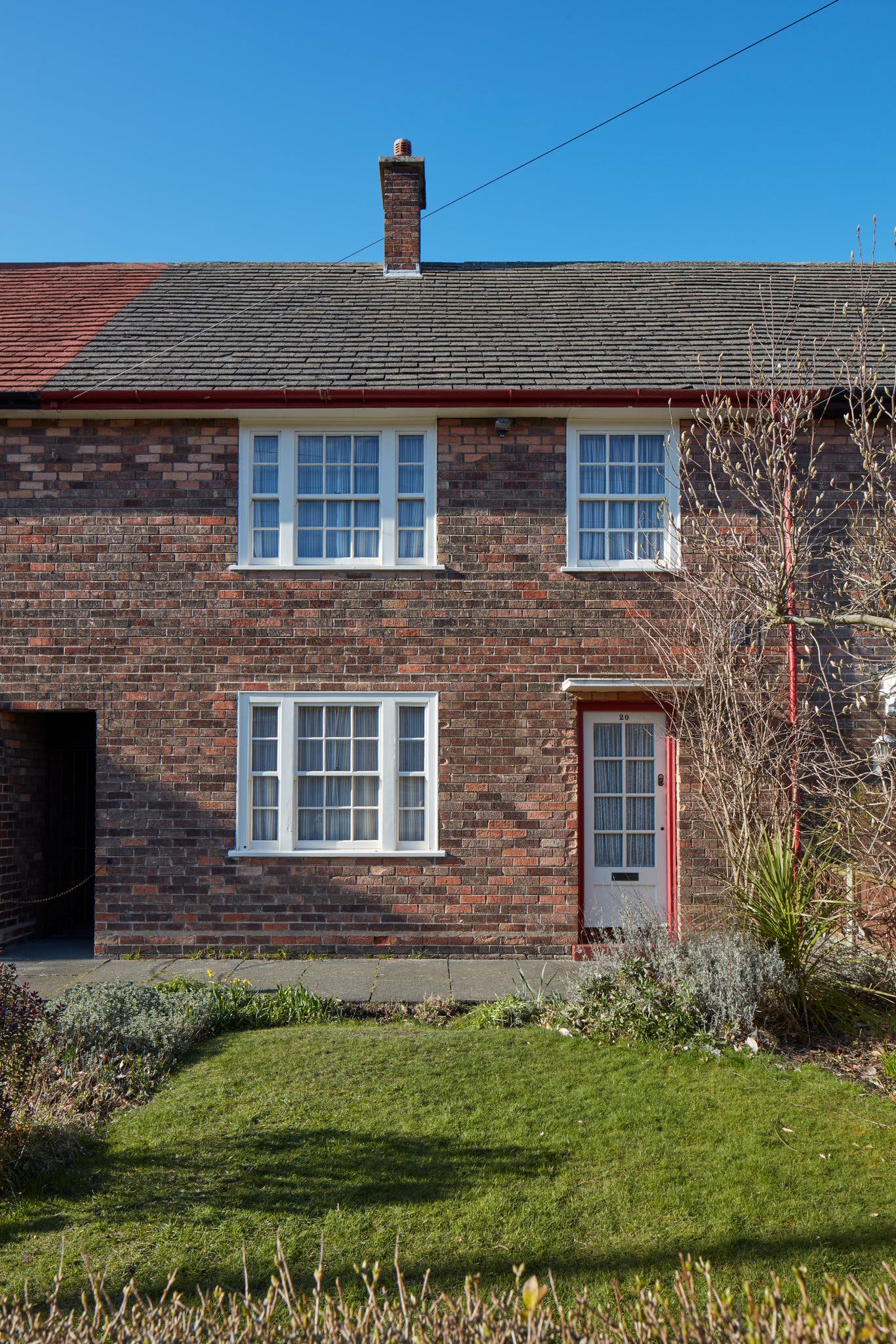 The next day, we stopped in the men’s fashion district to see the former headquarters of Apple Corps, the Beatles’s multimedia operation. The band bought the building at 3 Savile Row in 1968 and played their last public concert there on the roof on Jan. 30, 1969. Two guitars in memorabilia display cases just inside the landmark building are the only signs of the band’s former home. Around them, salespeople bustled. It is now an Abercrombie & Fitch Kids, and salespeople bustled by, indifferent to history.

I yearned for authenticity. In Liverpool, Beatles tourism brings in £82 million, or about $116 million a year, according to a 2016 study commissioned by the City Council. I didn’t know whether to expect depth or Disney. We got the latter the first afternoon, glimpsing our first Magical Mystery Tour Bus, and, along the dockyards, a Yellow Submarine houseboat for rent. Outside the Beatles Story museum, Sgt. Pepper, himself, stood hawking tickets. His buttons looked worn.

The museum was actually a decent primer for the uninitiated, showing the musical roots of the band, with replicas of the Casbah Coffee Club and the Cavern Club. It prepared me for the next day’s show: the Fab Four Taxi Tour. I had reserved months in advance, informing the company that my husband was not their average tourist.

They sent Gareth Byrne, 57, in a black cab with the name “Michelle” on the side. We were soon treated to his deadpan humor, encyclopedic memory and an accent that begged for subtitles. He considers himself a Scouser, a true native of Liverpool. Don’t call him a Liverpudlian, for that sounds too high-class. A Scouser is named for the city’s lamb stew, Lobscouse, that sailors used to eat on the docks, he explained. 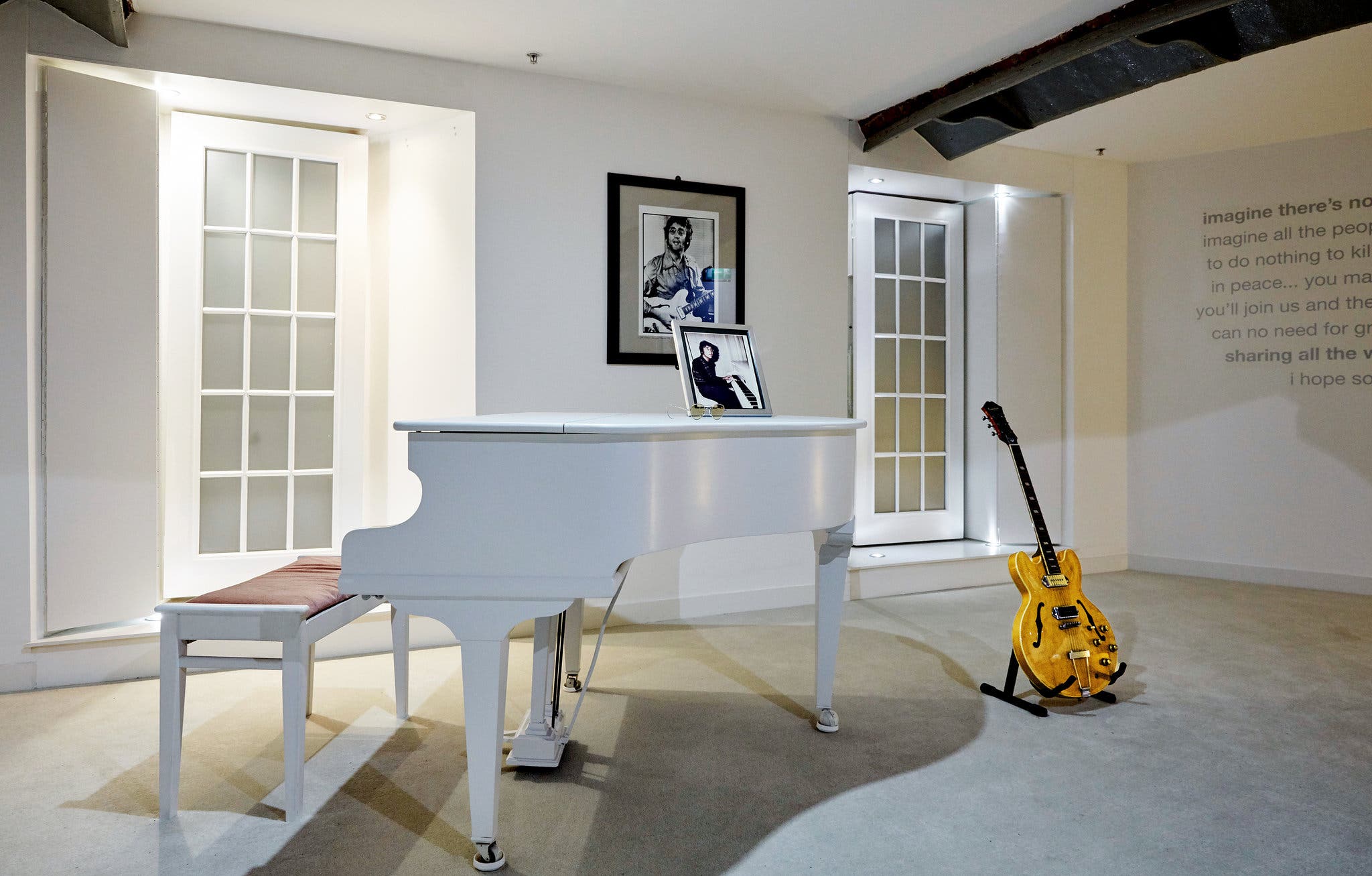 Throughout the next three hours, Gareth would be part college professor, part stand-up comedian and full-time wedding photographer who insisted he knew how to capture the best angles, taking multiple shots to be sure. We really weren’t in a position to argue. Turned out, he was right.

On a cool, cloudy early afternoon, we started slowly by visiting the registrar where John Lennon’s parents got married, the outside of the hospital where John was born, the pub that he first frequented. From there, we saw Ringo Starr’s first home, a rowhouse boarded up and still slated for renovation by the city with other empty houses in the Welsh Streets neighborhood, but stalled in bureaucracy.

In contrast, Paul McCartney’s brick childhood home was well-preserved from the outside. The inside was off limits unless you reserved a different tour with England’s National Public Trust, which owns the home.

The same with John Lennon’s childhood home. Outside of the Menlove Avenue house where John lived with his Aunt Mimi since he was 5 years old, Gareth told us about the day when his mother, Julia, visited. After years of not hearing from her, following his parents’s divorce, John learned she had lived only a few blocks away. They began repairing their relationship. But one day after visiting him, Julia was crossing the street when she was hit by a car. Gareth gestured toward the corner, and I felt the chill. 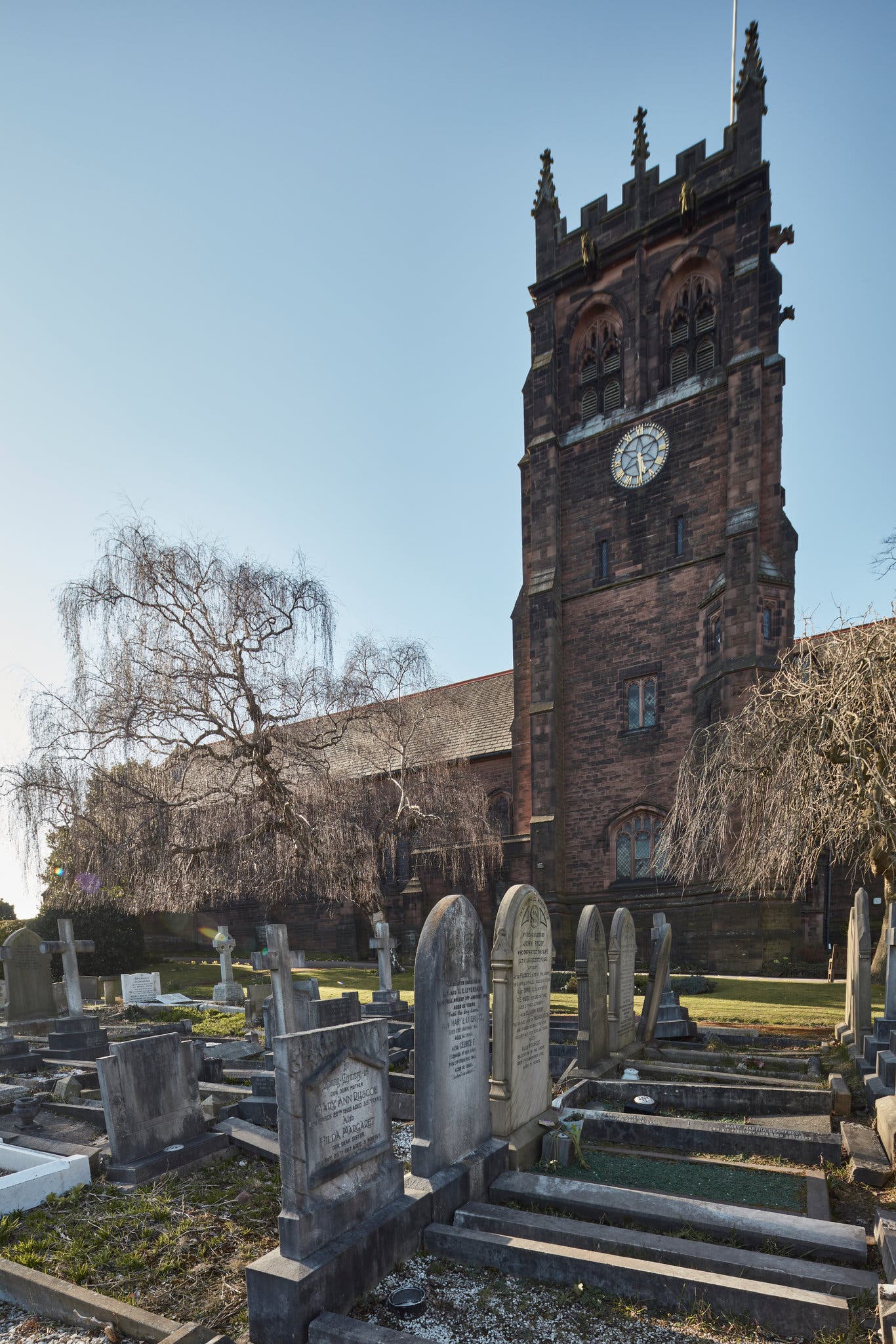 George Harrison’s childhood home was still a simple, private house, partially blocked by bushes out front. A soft yellow rose burst from one of the bushes, and it felt just right for the most spiritual Beatle.

No Liverpool tour is complete without a stop on Penny Lane to see the lyrics come to life. Gareth showed us how the Beatles played with the map, since not all of the verses correspond to places on Penny Lane. Rather, the song “Penny Lane” describes a neighborhood.

Tony Slavin’s barbershop was still there, but we didn’t stop and say hello. The bank on the corner is now a medical practice. The shelter in the middle of the roundabout used to house a restaurant, but appeared vacant now. The firehouse closed in 2015. The Penny Lane street sign is replaced about once a week, Gareth said, thanks to vandals. Another, more weathered sign is still painted in the stones across from a school where boys in uniform were practicing cricket beneath blue suburban skies.

From there, it was a skip over to Strawberry Field, where we slipped into a parking spot ahead of the Magical Mystery Tour bus, eliciting a victory cry from our driver. The location seemed remote, not like the crowded Strawberry Fields of Central Park fame.

In the front seat of Gareth’s cab he had several Beatles books. He had highlighted passages in Mark Lewisohn’s most recent work, “Tune In,” that he thought were factually incorrect. He and Ricky debated those facts. 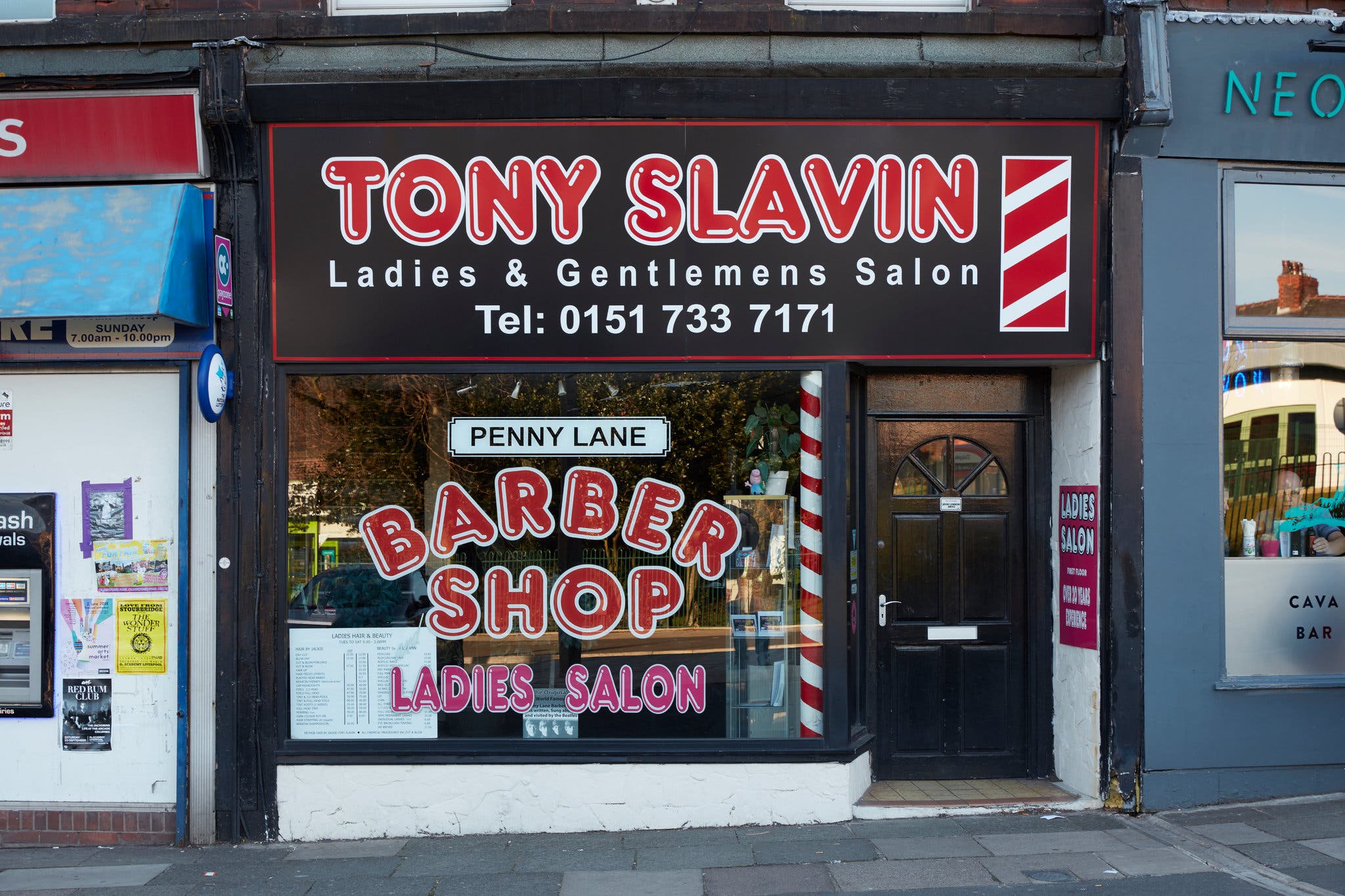 The barbershop mentioned in the song "Penny Lane." Credit Andy Haslam for The New York Times

The tour was winding down, finishing in the parking lot of St. Peter’s Church where Paul first heard John and his Quarrymen skiffle band play a Sunday picnic on July 6, 1957. In the cemetery across the street was Eleanor Rigby’s tombstone.

Beginnings and endings. We had come full circle.

As we were parting, I thought I would ask Gareth his favorite song. “‘I Feel Fine,’” he said with a sigh, as if weary of the question. But he winked, remembering the tip.

“There’s a Beatles song for anything going on in your life,” Elizabeth Kiessling, 32, said later that afternoon in Liverpool. A lawyer in Washington, D.C., she was visiting with her mother, Marcia Kiessling, 62, from Evansville, Ind. “The bottom line — it makes me so happy,” Elizabeth said.

Her mother recalled how the Beatles were always a family institution, starting from the time they gathered to watch their first United States appearance. “I was 9, and I remember seeing them on ‘Ed Sullivan,’” Marcia said. “My father said, ‘What do you think about those haircuts?’”

Earlier that afternoon, mother and daughter had danced at The Cavern Club, where the Beatles played their early gigs. In its seventh decade, the club still hosts live music, and is the finish for the Magical Mystery Tour. Other tour buses come, too, and on that day, a load of retirees from Australia had disembarked to dance. They remembered 52 years earlier how they squealed when they spotted the plane carrying the Beatles to their concert in Adelaide coming in for a landing. 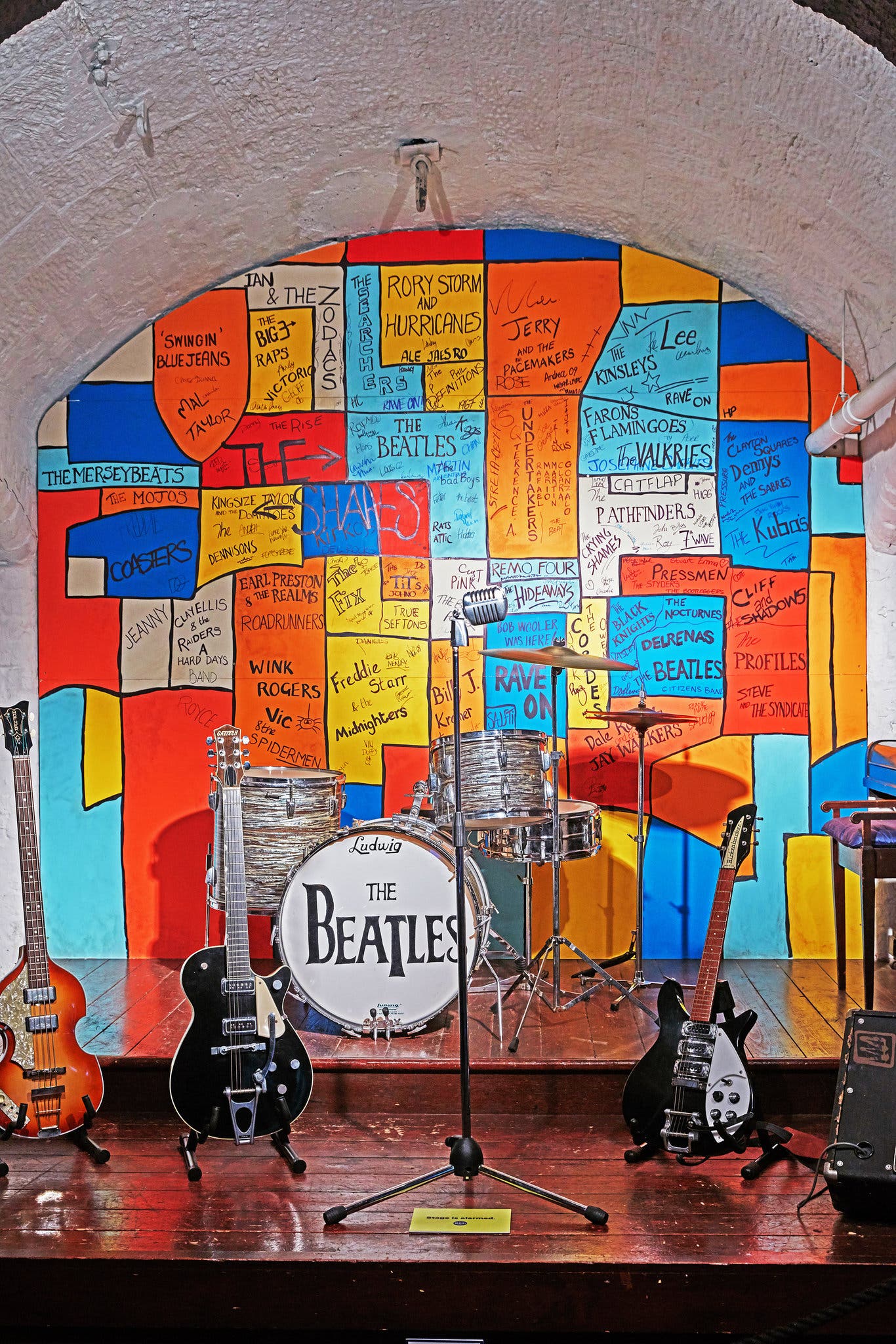 A replica of the Cavern Club at the Beatles Story museum in Liverpool. Credit Andy Haslam for The New York Times

On the waterfront, with flags flying on the Cunard Building, four outsize statues of the Fab Four loom.

Hector Martinez, 65, a supermarket owner from Cuchilla Alta, Uruguay, was photographing them with his son and daughter-in-law in tow.

“This was a dream from a long time ago,” Mr. Martinez said.

Could he explain what it was about the Beatles’ music that brought him to Liverpool?

“I don’t know. It fulfills me. It’s an enchantment,” he said in Spanish, my husband translating. “Sometimes in Uruguay, I take walks on the beach listening to their music.”

The day had turned gray, windy and British again, but Mr. Martinez didn’t seem to notice. As we asked him what the trip meant, his explanation was ours as well.