It's worth going to New Orleans for the music alone. Any night of the week you'll find world-class jazz – not to mention funk, soul, rap and bounce – for $10 a gig or less

Tremé was once a thriving musical neighbourhood. The strip of North Robertson Street had seven jumping live music bars. Things have changed, following the hurricane, the ensuing gentrification, and the eponymous television show. Joe's Cozy Corner is now a twee little residence, and the Petroleum Lounge has become the Treme Coffee House, where tourists gather to ride Segways through the neighbourhood and a chalkboard hawks the Treme Panini. All that remains is the Candlelight Lounge: a modest cinder-block structure. A row of chairs marks the stage. The owners keep odd hours but they are consistently open on Wednesdays for the Treme Brass Band. This eight-to-10-piece ensemble performs acoustically, apart from a microphone for the singer. The bar serves beer and simple mixed drinks, and it's one of the last places in town you can buy a "set up", which is a half-pint of liquor, a can of soda, a bowl of ice, and a few plastic cups.
• 925 North Robertson Street, +1 504 525 4748, facebook.com/Candlelight-Lounge. Open daily from 11am-till late. Check with venue for listings information 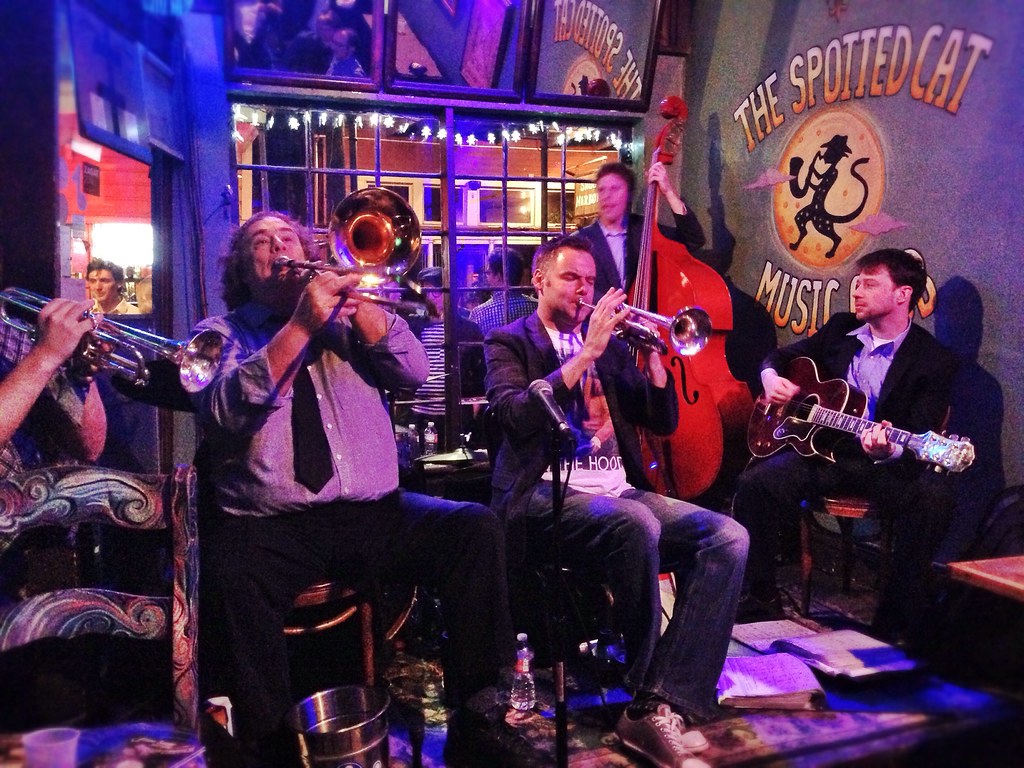 The sophistication of the music and the quality of the musicianship are set against a gritty bare-bones interior with a cash-only bar where you certainly will not get a martini. Everything is served in plastic cups. To the delight of some and the horror of others, you can still smoke. The crowd ranges from European tourists to bachelorette parties, to whichever film stars are in town for work. There are a few chairs at the bar but the room quickly becomes standing room only as the dancefloor is overtaken by swing fanatics. The finest names of the new jazz talent, Sophie Lee Lowry, Meschiya Lake and Aurora Nealand, all have regular gigs here. It's the only bar in town with an upright piano in the ladies' bathroom.
• 623 Frenchmen Street, +1 504 943 3887, spottedcatmusicclub.com. Check venue website for event details The titular Muses are music, fancy beverages and world-class tapas. This is a more sophisticated joint than the Spotted Cat. You can get a cocktail with exotic ingredients. You can pay for it with a credit card, and it will be served in a glass. No smoking. Chef Dan Estes' work is on par with that of the great local chefs who come to eat here on their nights off. The tiny stage features jazz and Americana. With the exception of Friday and Saturday late-night shows, it's a quiet place where you can appreciate the nuances of the music and hear the words. The tables fill quickly. There can be a bit of a wait, so a good move would be to go there first, put your name on the list, and stroll the street while you wait for your table to come up.
• 536 Frenchmen Street, +1 504 252 4801, thethreemuses.com. Open Mon, Wed-Sun 5pm-till late. Check venue website for event details 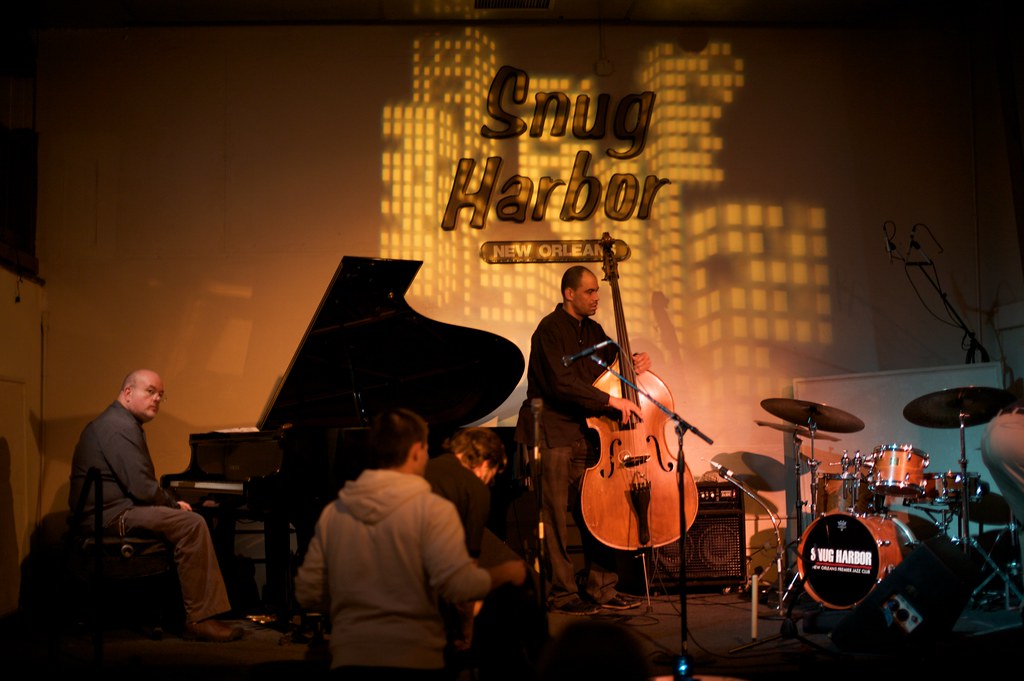 Snug Harbor, the oldest club on the now-booming Frenchmen Street, is still the premier spot to hear jazz in New Orleans. This is Jazz with a capital "J" – the old masters, not the fresh-outta-music-school tattooed hobos, who are, in fact, quite good and may graduate to play here one day. Delfeayo Marsalis or Jason Marsalisand Wynton's drummer Herlin Riley are among the A-list local and national jazz greats seen nightly. They have a real stage with a real piano and a real sound system. There's also a real cover charge, and the audience is expected to, and really does, shut up and listen to the music.
• 626 Frenchmen Street , +1 504 949 0696, snugjazz.com. Check venue website for event details

With Frenchmen Street being the hot new thing, it's not a question of if, but when, it gets too crowded for you. At that point, it's time to head a few blocks away to Buffa's Bar on the edge of the French Quarter. With its oval windows and neon signs, the front bar remains true to its architectural intention: a classic dive bar. In the back, there's a slightly raised stage and a floor of tables. Pianist Tom McDermott accompanies Meschiya Lake and Aurora Nealand in a more intimate duet setting. Original Dr John sidemen Jerry Jumonville and Freddie Staehle have a happy hour show on Friday.
• 1001 Esplanade Avenue, +1 504 949 0038, buffasbar.com. Bar open daily, 24/7. Check venue website for event details 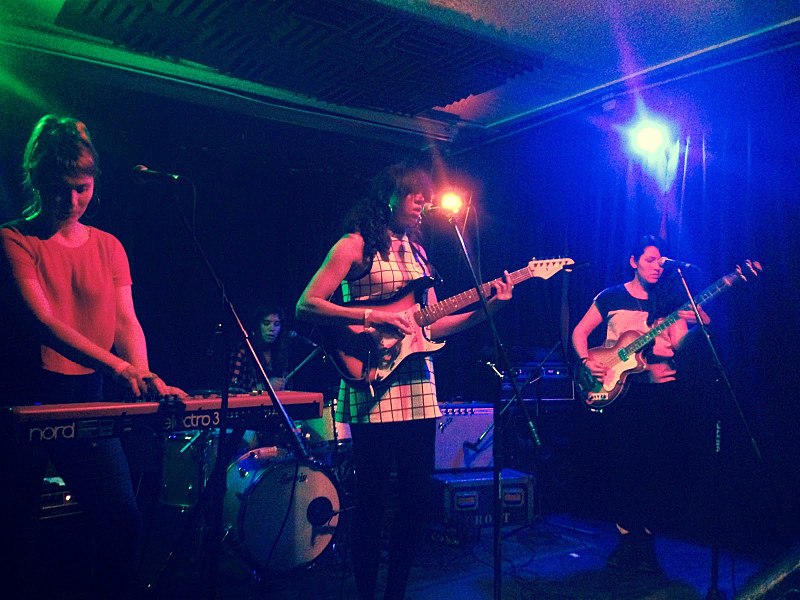 If the Tremé neighbourhood has been eclipsed by Frenchmen Street, the consensus in the New Orleans music community is that the strip of clubs on St Claude Avenue is the start of the next big thing. Proof that there are vibrant scenes beyond funk, jazz and brass, Siberia hosts artists ranging from New Orleans homegrown sludge metal group EyeHateGod to pre-eminent singer-songwriter Alex McMurray. Upcoming shows include a fundraiser to bring Sissy Bounce Rapper Katey Red's entourage to Austin's SXSW music conference, and a bill of four unknown punk bands. Siberia has a rock club sound system that delivers rock and rap shows at proper volume: ear-splitting.
• 2227 St Claude Avenue, +1 504 265 8855, siberianola.com. Open daily from 4pm. Check venue website for event details

Celebrating its 40th anniversary, the Maple Leaf is the granddaddy of Uptown clubs. While proprietor Hank Staples has kept the pressed tin walls and ceilings that give the bar its bit-of-a-dump vibe, he has invested in the infrastructure, so the club has adequate air conditioning, a wooden dancefloor, and a top-notch sound system. The Rebirth Brass Band's regular Tuesday night show is an institution. On the weekends, look for New Orleans' best offerings in funk music, from Johnny Sketch and the Dirty Notes to Ivan Neville's Dumpstafunk.
• 8316 Oak Street, +1 504 866 9359, mapleleafbar.com. Open daily from 3pm-till late. Check venue website for event details 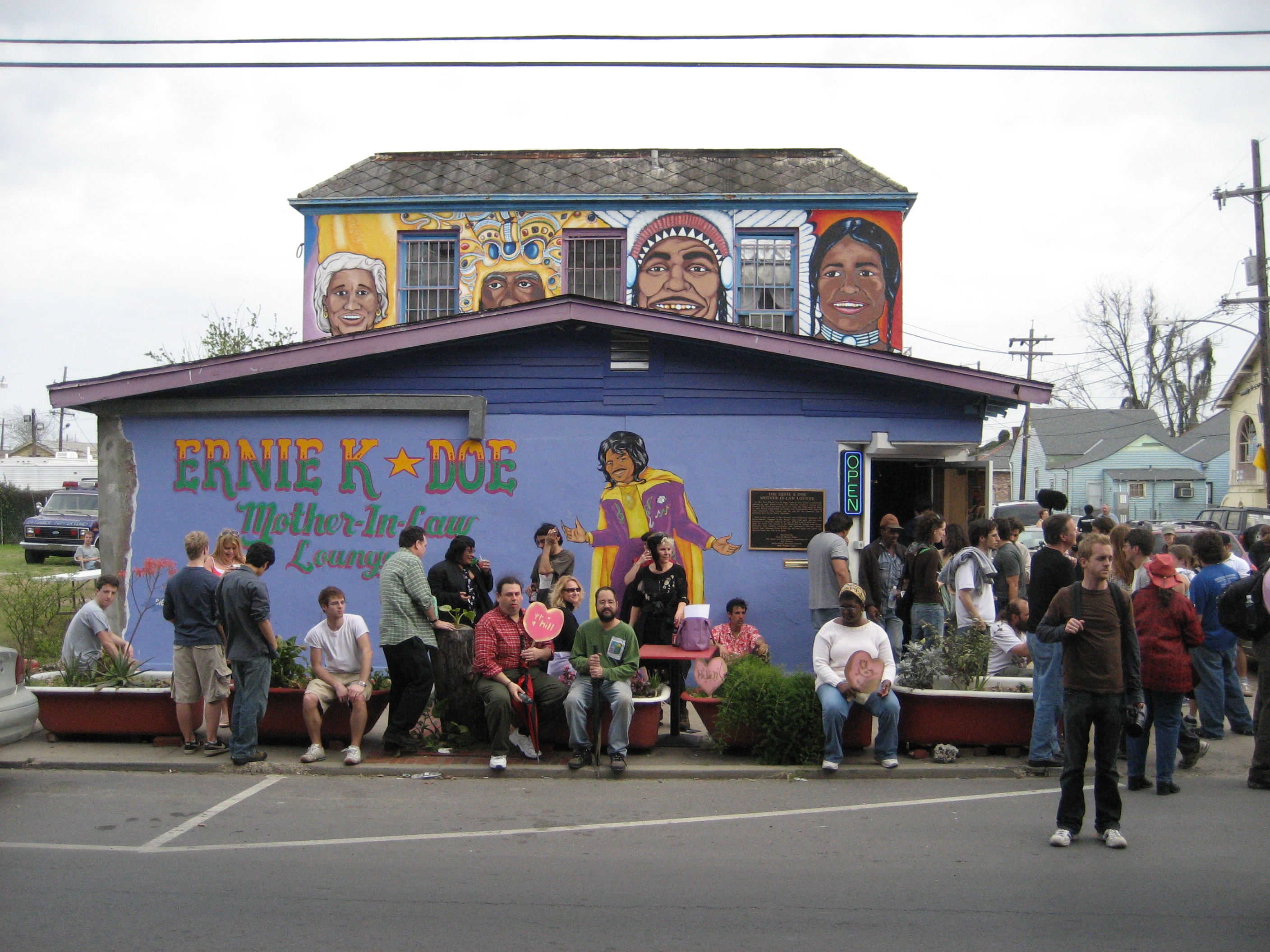 Self-proclaimed "Emperor of the Universe" Ernie K-Doe named this hole in the wall in the shadows of the I-10 overpass after his 1960 hit song. You can't miss it. Paul Deo's murals on the exterior are amazing. Ernie K-Doe was survived by his wife Antoinette, who kept the club open until she died in 2009. It was reopened in January by trumpet player and local hero Kermit Ruffins. In the early 90s, Ruffins quit the Rebirth Brass Band because he didn't like the gruelling touring schedule. As befits a great entertainer who doesn't like to travel, Ruffins has hosted a series of weekly gigs (Thursdays at Vaughn's, Tuesdays at Bullet's) that became nights of legend. After a brief stint as owner of Kermit's Tremé Speakeasy, Ruffins has shuttered that joint and is now proprietor of the Mother-in-Law.
• 1500 North Claiborne Avenue, +1 504 947 1078, no website 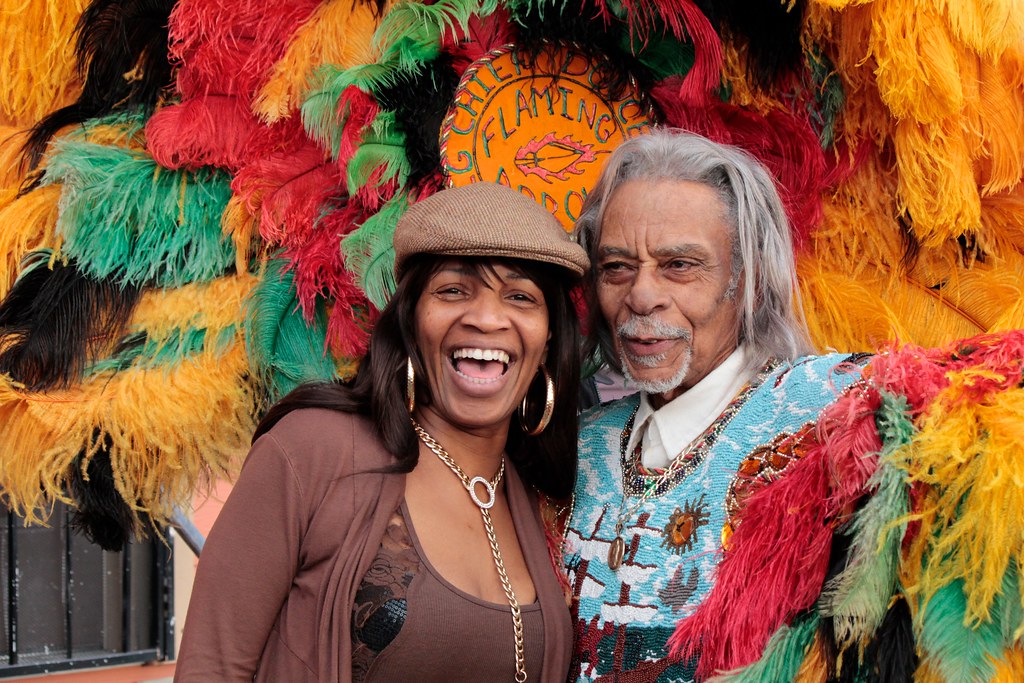 Big Chief and Judy of Ooh Poo Pah Doo, by Bother Mike of the North. Flickr.

The club is named after Jessie Hill's 1960's R&B hit single and is close to the Mother In Law – apparently there is a new club district afoot: nightspots named after songs produced by Allen Toussaint. On Orleans Avenue, this club would not have been recommended a few years prior because the Iberville Projects (council estates) were across the street. The projects have been torn down and, taking a historical long view, the undeveloped space across the street was the location of the legendary red-light district Storyville. That is a bit more romantic and touristy. Those exercising due caution arriving at and exiting the club will be treated to an authentic night of down-home blues or jazz in one of New Orleans' last authentic juke joints. The low ceilings, the leather couches and the friendly clientele give this club a living-room atmosphere.
• 1931 Orleans Avenue, +1 501 435 3384, facebook.com/oohpoopahdoobar. Open Mon-Thurs, and Sun 10am-midnight, Fri-Sat 10am-2am