Stairway to heaven: Entrancing hike through the Mountainous Kumano in Japan

31/01/18
Stairway to heaven: Entrancing hike through the Mountainous Kumano in Japan

Normally I am not given to praying but the occasion demands it. After bowing twice and clapping twice, I make a silent entreaty that my trek will go well. My obeisance is taking place in front of a small wooden building, rather like a summerhouse. It is a shrine in the town of Takijiri-oji, a starting point for the Kumano Kodo pilgrimage trails.

Kumano is the traditional name for the southern part of Japan’s Kii peninsula. It contains pilgrimage routes dating back more than a millennium. The first pilgrims were adherents of Shinto who travelled to worship beside the natural wonders of the sacred Kii mountains. Later pilgrims followed an amalgam of Shinto and Buddhism.

There are a variety of routes to choose from and treks often take between three and six days. I opt for three days on the Nakahechi route, the most popular of the six main historic trails. The most demanding is the 80km Omine-Okugakemichi route: suitable only for expert hikers with mountaineering experience. I walk a total of 15km through a wide range of terrain, some of it quite challenging. It is a pick-and-mix experience; you can walk as little or as much as you like, because buses run between many points on the trail network. Guides are available but most trekkers are self-guided. 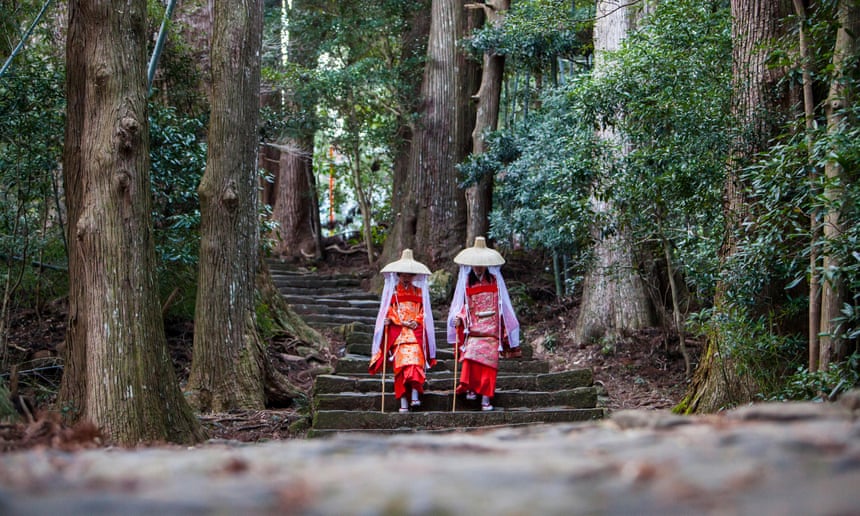 The main destinations are the shrines of Kumano Hongu Taisha, Kumano Hayatama Taisha and Kumano Nachi Taisha. The start of my trek is a steep, zigzagging 250-metre climb out of Takijiri-oji. The views are compensation. This landscape is ruled by trees: forests of maple, cypress and cedar smooth the mountains into fecund cones. The path before me is latticed with roots. Sometimes they offer steps; elsewhere they are obstacles. When my left boot snags one I take a tumble: a reminder that I’m not being as mindful as somebody on a Buddhist trail could be. But I need no prompting to move away when a large insect with myriad orange legs cantilevers onto the trail – it is a mukade, a poisonous giant centipede.

After strolling through woodland glades punctuated by wild azalea I reach Takahara village (4km from Takijiri-Oji), where I encounter Iwami Kazuyasu, a friendly middle-aged resident hoeing a plot of mustard plants inside an enclosure. “I have to have a small electric fence round my vegetables to keep wild boar away,” he says. Down the slope below him, I can see a woman in a bonnet harvesting green tea. 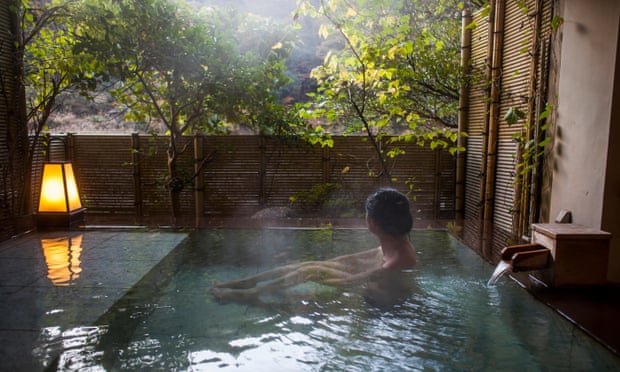 That evening I stay in the nearby town of Kawayu Onsen, a town built along a river valley containing several hot springs. As I lie back in one of them and let the aches of the day disappear, I look up to see a black kite glide down the valley and vanish into the trees.

The next day’s goal is my first grand shrine, Hongu. It is a 7km walk from my starting point, Hosshinmon-oji, a subsidiary shrine that marks the outermost entrance to Hongu’s sacred precincts. The grand shrines all have an imposing torii, or gateway, that look like unusually decorative, outsize goalposts. As I near Hongu its gateway looms larger: it is the world’s biggest, at 34 metres high. As well as gateways, the grand shrines share other architectural features. Their roofs are steep and curved, with x-shaped cross pieces above their gables and log-like beams laid perpendicularly across their roof ridges. 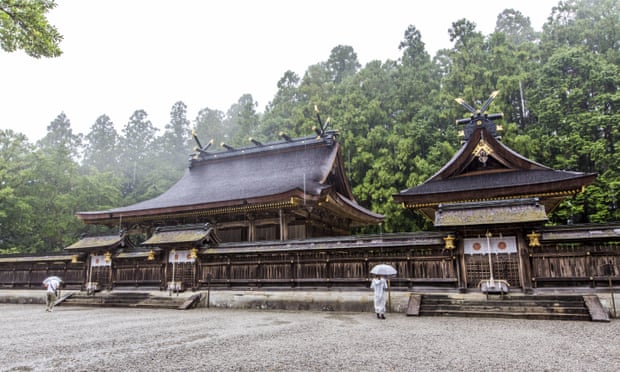 Near Hongu’s entrance is chief priest Kuki Ietaka, resplendent in white robes. He is engagingly non-sectarian, welcoming his growing numbers of foreign visitors. “I really like to see them,” he says. “I’m always keen to ask them what they think of the shrine and how we can take it forward.”

Travelling by boat through the Kumano-gawa river valley is a traditional option for pilgrims, so that afternoon I float down to the Hayatama grand shrine, admiring the idiosyncratic rock formations along the valley walls en route. Hayatama has a massive Asian bayberry tree in its grounds, believed to be eight centuries old. Placing one of its tough, oval leaves in your wallet is said to ensure you will never run short of money. Alas, strain as I might, the lowest branch remains beyond my grasp. Fortunately there is other bounty available. The shrine lies on the coast and Kumano is renowned for its seafood. In the adjoining city of Shingu I enjoy the freshest of sashimi, which includes translucent prawns, washed down with kumanogawa sake. 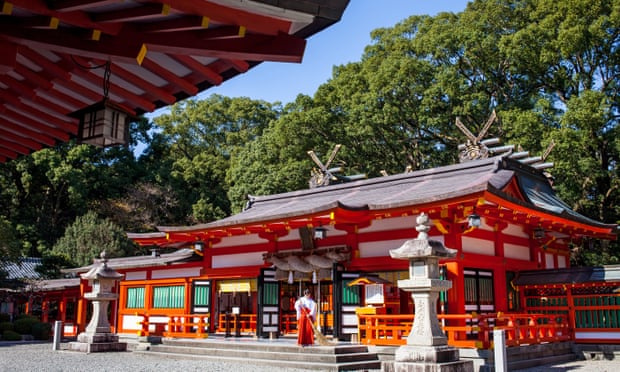 Originally, Hayatama was sited halfway up nearby Mount Gongen, where its parent shrine, Kamikura jinja, remains. Should I mention that the weather on the Kumano Kodo is notoriously changeable? As I tackle the 538 steps to Kamikura jinja, rain turns them into a slippery waterfall. The shrine stands alongside a gigantic boulder called Gotobiki-awa, which is said to be where the Shinto gods first appeared on Earth. Sometimes the boulder is compared to a giant toad, but to me it resembles a colossal umeboshi, one of the region’s irresistible dried pickled plums. I stand next to it, drenched, and gaze down upon Shingu, spread at the edge of the Pacific like a soggy bathmat.

Many Kumano Kodo trails are inland but a major route to the third grand shrine, Nachi, runs beside the ocean. I squelch gamely onwards past paddy fields and clumps of bamboo, roiling waves on my left. A red clawed crab scuttles across my path before nestling up against my right boot.

Shortly after, I arrive at the final approach to Nachi, the Daimonzaka: a stone pathway between towering cedars. In the rain and mist it is ethereal. The shrine honours the adjacent Nachi-no-Otaki waterfall, Japan’s highest at 133 metres. I can hear the tumult of its cascade but through the saturated air I catch glimpses only of its base. It’s a fitting end to my trek, a reminder that nature’s elemental power lies so utterly beyond our control.

Getting there
The trip was provided by Wakayama Tourist Board. InsideJapan has a new 16-night Honshu Hiking trip that takes in sections of the Kumano Kodo trails and the Nakasendo Highway from £2,630, including accommodation – hotels, traditional ryokan and temple lodgings – breakfast and some other meals but not international flights.

Best time to visit
The Kumano Kodo trail can be walked year round. Popular times are March/April for the cherry blossom season, and October/November for autumn colours. Daytime temperatures average 10-15C in spring and autumn and 25-30C in summer.

5
Angkor Wat: History of Ancient Temple
En esta sección
Comments
Bhutan, the "kingdom" between mountains that is famous for its colorful festivals
The best Indian beaches away from the crowds